USC Round 4 Plus A Whole Heap More 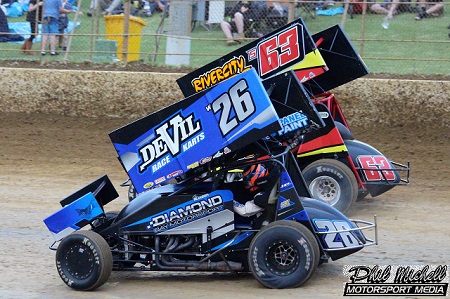 The Murray Machining and Sheds Murray Bridge Speedway will celebrate the New Year with a massive night of Speedway action this Saturday night featuring Round 4 of the Shadetec Ultimate Sprintcar Championship SA and a huge U-Pull-It Demolition Derby.

Going into the fourth round of the USC SA Luke Dillon holds a slender lead of 8 points over Matt Egel who is only a further 2 points ahead of defending Champion Robbie Farr. This season Dillon has recorded a series of strong results that includes a win in the opening round of the series in addition to a further two podium results.

Egel has also secured a feature race victory stealing the win from Farr in the previous round a dramatic finish.

You can expect to see these three drivers upfront once gain this Saturday night but the addition of Californian Corey Eliason, in the Steve Stathy owned Diamond Bay #26 will sure add some extra spice. Throw in Sydney youngster Marcus Dumesny, who won his first career A-Main on Boxing Day at the Valvoline Raceway, Victorian Peter Doukas, Tasmanian Tim Hutchins and the remaining locals including Ryan Jones, Steven Caruso, Brock Hallett and Lisa Walker it will be a great way to bring in the new year.

As has been the case this season the Wingless Sprint numbers are strong with over 20 cars expected to front for action including Australian Champion Joel Chadwick, who is undefeated this season at Murray Bridge, Matthew Kennedy, Anthony Tapley, Joel Heinrich and Brad Evans.

Throughout the season the Wingless Sprint racing has been extremely entertaining and you can be assured that Joel Heinrich doesn’t want to lose another feature to Joel Chadwick having led the most laps in the past two events only to be passed late in the race.

The night will also feature a field of over 20 Street Stocks and a competitive field of Junior Sedans.

This Saturday night will be the only event to be staged at MMS in January with racing to return on February 2, 2019 with the V6 Sprint Des James Memorial, Wingless Sprints, Late Models, Street Stocks and Junior Sedans.