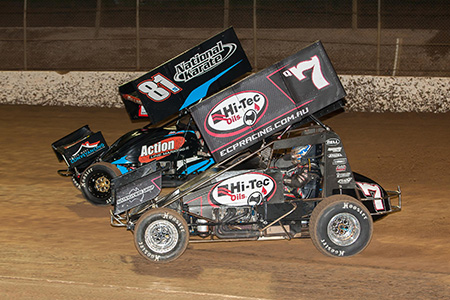 A Sprintcar race that has been 60 years in the making will take place this Saturday and Sunday night at the Murray Machining and Sheds Murray Bridge Speedway with the 60 Lapper, a race that will pay out $60,000 in prize-money to celebrate 60 years of the iconic South Australian venue.

A total of 38 drivers have nominated for the two-night extravaganza, that will also double as Rounds 5 and 6 of the ShadeTec Ultimate Sprintcar Championship SA.

Some of the best Sprintcar drivers Australia has ever produced have been attracted to this historic event including Grand Annual Sprintcar Classic Champion and current USC SA points leader Robbie Farr, current World Series Sprintcars Champion Steven Lines and former National Champions James McFadden and Dave Murcott. All four of these drivers will be considered a serious threat for the $15,000 winners’ cheque but they won’t be the only drivers with a real chance of victory.

Local hopes such as Brad Keller, Luke Dillon, Matt Egel, Ryan Jones, Daniel Pestka and Aiden Hall will all be out to defend their home turf and they would all love to place the six-foot-tall first place trophy on their living room mantle.

Two International drivers will also make the flight across the ditch with Brett Sullivan and Stephen Taylor representing New Zealand. Both drivers have previous experience at Murray Bridge and they could prove to be a couple of wildcards.

The opening night of action will see with two rounds of heats prior to the 25 lap Preliminary A-Main, with the priority being to finish inside the top 10 to lock your place into the 60 Lapper on Sunday night.

Night 2 will see a further round of heats, excluding the top 10 from night 1, prior to the Dashes, C and B-Mains and the historic 60 Lapper.