Another Historic Performance By Farr 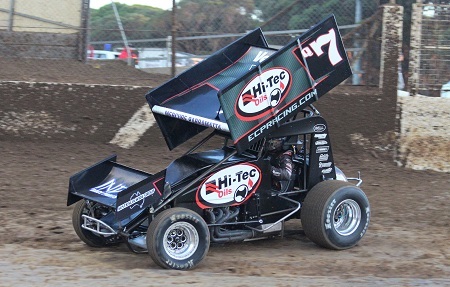 Robbie Farr etched his name into the record books as the winner of the inaugural 60 lap Sprintcar race at the Murray Machining and Sheds Murray Bridge Speedway on what was a fantastic way to celebrate 60 years of racing at the iconic venue. After trailing early race leader Matt Egel for the opening 17 laps once Farr made the decisive move he wouldn’t be headed as he went on take an historic win ahead of Brad Keller and James McFadden.

“Who said an old man couldn’t do 60 laps” joked Farr as jumped out of the car following the win.

“I can’t thank my guys enough, they gave me a great car. We made a few changes after the dash, but we were a bit worried about what the track might do but it hung in a lot longer than we thought it would, so we didn’t have to change a thing during the open red” added the elated winner.

For Keller the runner-up position was a fitting result after a solid weekend that also saw him finish fourth on night 1 while McFadden’s third place result was a stunning fightback after he found himself hanging off the turn 2 catchfence during his opening heat of the weekend.

Earlier in the day the main concern from the drivers was regarding the potential tyre wear in the 60-lap final but track that proved to be non-existent as the track was extremely fast and locked down with very few passing opportunities.

With the race being cut into two segments Farr would pace the field to the open red, that was called three laps early after Matt Egel, who was second at the time, slammed the wall and rolled hard in turn three after a mechanical failure.

The red-light stoppage would also see the end of Aidan Hall’s impressive run as his right rear tyre went flat after being burnt by the heat and flames from the exhaust, At the time Hall was in third therefore in 1 lap both second and third were taken out of the equation elevating Steven Lines to third.

Lines would move to second shortly after the restart but would crash out in spectacular fashion on the exit of turn two after his right front wheel parted company with Q83 sending the car upside down.

Another driver who struck issues late in the race was Jessie Attard, who had a power steering hose let go spraying him with hot oil forcing him onto the infield in a real hurry robbing him of a strong top 5 result.

Earlier in the night the racing was brutal with Joel Heinrich, Brendan Quinn, Stephen Taylor and Matthew Dumesny crashing out in the heats, while Ben Morris pulled the turn four catch fence down in the B-Main. The B-Main also saw a scary moment as Marcus Dumesny had a huge on-board fire forcing him to exit the car while alight. Luckily his safety equipment did its job and he emerged unscathed.