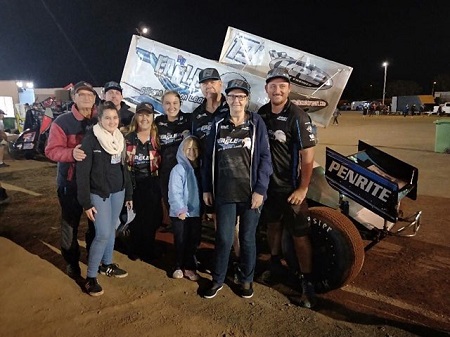 The two final rounds of the Ultimate Sprintcar Championship Queensland on Good Friday and Easter Sunday bought down the curtain on the Mitchell Motorsport Sprintcar team after more than 25 years on Australia’s dirt ovals.

Throughout the weekend the Eagle Ignition Leads / Penrite supported #19, with Danny Reidy behind the wheel, collected a sixth and a ninth placed finish in the 40 lap finals therefore the Team once again finished inside the top 10 in the overall Championship, an accomplishment that the Mitchell Motorsport Team has achieved in all previous USC Queensland Championships.

“Danny finished in 7th place in the final USC points, missing 6th by a single point despite the team missing the opening round. Since the inception of the Queensland USC, the team has finished 4th, 3rd, 5th and 7th respectively. When you consider this year alone a total of 74 different drivers contested the series, we have been more than competitive. We only had one DNF in the four seasons with a front suspension component failure. Without a doubt our highlight was winning the 50 LAP A Main in 2018” added Team Owner Peter Mitchell as he reflected on his Teams’ performance.


Good Friday saw 29 cars turn up with the format including time trials in hot laps. A super quick surface saw team driver Danny Reidy time in eleventh resulting a fourth starting spot in his opening heat. Danny held onto his position for a fourth-place finish before finishing fifth in heat 2.

Prior to the final the track showed no signs of slowing therefore the team worked hard on the setup knowing that it could be tough to move forward from position 12 in the 40 lap A Main. Danny drove a fantastic race, getting as high as fourth, before the tyres cried enough. There was plenty of tread left, however the high speed took its toll with severe blistering. Danny fought hard over the final 10 laps, only dropping two spots, and greeting the chequered flag in an excellent sixth, recording the third fastest lap of the race in the process.

The Grand Final of the USC on Easter Sunday Night saw an increased field with 34 cars in the pit area with the same racing format.

During qualifying the team didn’t quite get it right and just missed the heat race inversion, meaning Danny would start from the fourth row in the first heat. The track was a little more conducive to passing with Danny making up valuable spots and points finishing in fifth place.


As we all know sometimes you need a little luck in racing and Danny’s opening heat performance had forced his way back inside the inversion and he started from position 1 in the second heat and he went on to take the win and with it more valuable points.

Although Danny just missed the transfer straight in to the A Main, he started from the pole in the 15 lap B Main and he went on to take a comfortable win, meaning he would start from position 17 in the 40 lap A Main. In what was another fantastic result for the team Danny bought the #19 car home in ninth place, which was an awesome come back after sitting in 23rd position on the points chart following qualifying.