REUTZEL IS THE RIGHT STUFF FOR ULTIMATE SYDNEY SPEEDWEEK 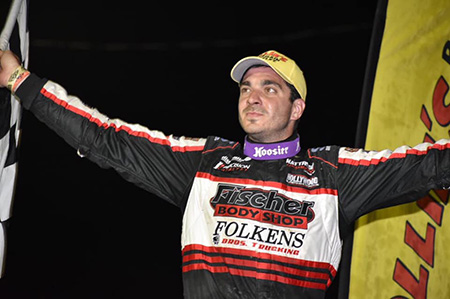 American Sprintcar superstar Aaron Reutzel is a spectacular and somewhat shock inclusion in the 2019/2020 Ultimate Sydney Speedweek at Valvoline Raceway this summer.

The Clute Texas throttle stomper will join up with promising Sydney based Saller Motorsport throughout the December 26-December 11 Sprintcar smorgasbord and run as part of a two-car team.

Starting his career as a junior in the late 1990’s Aaron has gone on to become one of the most feared competitors in All Star Circuit of Champions and World of Outlaws battles across the USA.

Reutzel can win anywhere and he’s proven that.

An ability, like many high profile Americans, to win in unfamiliar territory regardless of the rival standard is something that will aid the promotable Texan well in his Sydney sojourn.

“We can’t wait for this,” says fifth year Sydney USC NSW gasser Mick Saller, “Aaron runs a Triple X chassis like we do and Dad and I think we can learn a lot from the way he races and the way he goes about things. This can’t come soon enough. He doesn’t leave anything on the table and we can’t wait to see him rip the lip at Parramatta.”
Saller is becoming quite the wild card himself.

An Archerfield Speedway A-Main winner - one of few NSW drivers to have done that - and a WSS tourist the former water polo strong man is looking to make his sixth season his best after finishing 7th in the USC NSW points last season.

The joining of Reutzel and Saller Motorsport is expected to be a massive shot in the arm for both the team and the Ultimate Sydney Speedweek.

The Ultimate Sydney Speedweek will be contested over a storming two week period at the iconic Valvoline Raceway Parramatta with some stirring prize money and points fund incentives guaranteed to attract some of Australia and the USA’s best.