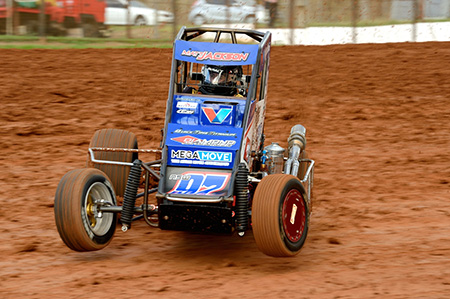 In front of a hearty crowd the trio celebrated their victories and each had to work hard to get there.

Jackson scored his second main event win of the season in as many starts in the Diamond Air-conditioning #97 but it was far from a given after he had to survive a titanic arm-wrestle with Kaidon Brown for much of the race before the hapless teenager tragically broke a throttle linkage and had to retire from the event.

Brown started on the front row after being high-point scorer and was supposed to share it with South Aussie Todd Wigzell who was spectacular in the Pole Shuffle winning every one of his battles before sadly succumbing to a blown motor just before his bout with Kaidon.

The interstate contingent was impressive with Queenslanders filling two spots in the top four - Brock Dean in particular being very smooth to come home in second place and looking like he may at times have had something for Jackson.

Sydneysider Harley Smee was third with Queenslander Glenn Wright fourth and Sydney’s Rob Mackay home in one of his best drives in some time for fifth.

For much of the race Mackay and Wright traded spots in a gripping battle to stay in the top four.

DNF’s were significant unfortunately but nobody had a bigger exit than lively South Aussie Robert Heard who flipped many times on the back straight whilst looking for a big pass on the cushion on lap fifteen.

The spectacular end was not a true reflection on his speedy evening prior.

The Syndicate Racing Team of Jamie Hall and Dan Biner registered DNF but had a very heartening night with their brand spanking new Stanton Mopar powered King chassis and were buoyed by their significantly increased speed.

Warrnambool’s Jamie Veal recorded his 18th career victory at Valvoline Raceway and in doing so edges ahead of George Tatnell on the all-time win list at Parramatta.

The victory was hard fought and by no means easy as the lead cars weaved through dense lapped traffic and if not for a mistake by leader and high points man Sam Walsh when he jumped the cushion in turn two the result may have been different.

Walsh tried several times to run down Veal but the #35 SWI Maxim was resolute and too smooth in the tight confines of the traffic eventually taking the chequers by a mere 1.037s from Walsh in second and Robbie Farr home third.

Farr had to, literally, run from the infield and the weighing scales, after the A-Main to the pits to climb into his Late Model for the A-Main immediately after.

Marcus Dumesny was flashy in the new look retro Valvoline #47 with a strong fourth place finish but it may have been his legendary father Max who had the biggest impact.

Max hosed both Marcus and even Daniel Sayre in the Pole Shuffle to start the A-Main in fourth place where he would finish fifth after some spirited dogfights.

Jessie Attard’s DNF was not reflective of his strong and racy performance throughout the evening where he started on the front row alongside Walsh and definitely showed his American track time has served him well.

Michael Stewart and Jackson Delamont came from the B-Main to place twelfth and thirteenth behind James Thompson in eleventh.

DNF’s were Attard, the always explosive Lachlan McHugh and Yass driver Brendan Scorgie who was unlucky for the second time this season.

Clayton Pyne staged a brilliant come from behind victory in the Hi-Tec Oils Ultimate Speedway Challenge Late Model main event but the last three laps were thrilling to say the least and the hard charging Ryan Fenech made him work for every last centimetre at the chequered flag.

Pyne came from position eight at the greens and began picking his way through the positions to eventually move into the lead spot until a critical restart with three laps to go put rear of the field charger Ryan Fenech up on the bumper.

Fenech absolutely grilled the #9 for the entire three rotations but couldn’t stop Pyne registering his first win of the new season ahead of Fenech by a mere 0.6 of a second with the always spectacular John Lodge Jr filling the last step of the podium.

The heartbreak story was Todd Bayley.

Back after an entire season off rebuilding his budget and motor program Bayley qualified on pole for the main event and battled to keep the number one spot after some tremendous dices with former Australian champion Darren Kane who looked to have the monkey off his back after a lean two seasons at VR.

Bayley was resolute in his attempt to keep the lead but suffered front end damage and had to retire the #19 on lap 22 after looking like at least a certain podium finisher.

Victorian standout Cameron Pearson was fourth car home ahead of Kane in fifth, lively Victorian Peter Nicola in sixth, Nathan Disney seventh, Lachlan Only eighth, Michael Hickey ninth and Ed Borg in one of his best ever drives to place tenth.

DNF’s were Todd Bayley, Robbie Farr and South Aussie Matt Crimmins was the innocent victim in an incident where Nicola and Farr came together and Crimmins had nowhere to go but slam into the spun Nicola.