The Ultimate Night Of Speedway At MMS 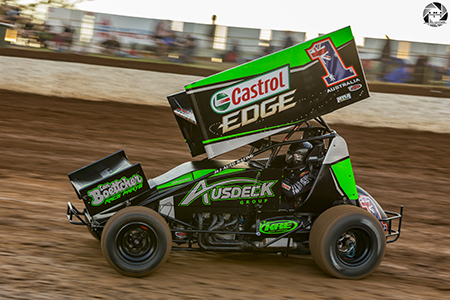 After a disappointing rain out in Toowoomba and an action-packed night at the Valvoline Speedway this weekend it’s Murray Machining and Sheds Speedway’s turn as they host round 3 of the Hi-Tec Oils Ultimate Speedway Challenge – presented by Moore Plant Hire. The “Challenge” features three of the most entertaining racing categories in Australian Speedway with 30 lap A-Mains for Sprintcars, Speedcars and Late Models.

For the Sprintcars the event is a significant one as it also the prestigious Bill Wigzell Battle of the Bridge along with the opening round of the Ultimate Sprintcar Championship SA. The field has attracted drivers from four Australian states including Andrew Scheuerle, who make a welcomed return to the Murray Bridge venue. Joining Scheuerle will be the defending and two times USC SA Champion Robbie Farr, with both drivers entering this Saturday night in winning form, with Scheuerle winning last weekend in Brisbane while Farr was victorious at Valvoline Speedway.

Leading the local charge will be Matt Egel, who dominated the opening Club Show earlier this season in what was an amazing display. Multiple “Wigzell Race” Champion Luke Dillon, Ryan Jones, Daniel Pestka, Aidan Hall, Lisa Walker, Steven Caruso and Keke Falland will also be driver to watch in what is an impressive 29 car entry.

The Late Model racing should be just as intense as it is hard to predict an outright favourite as the talent level is so high. The list is a who’s who of Australian Sedan racing with multiple National and State Champion among the 16 nominations. With the likes of Tasmanian’s Callum Harper and Brad Smith, locals Ryan Alexander and Mat Crimmins, Lachlan Onley and Todd Bayley from New South Wales and Brendan Hucker, Cameron Pearson and Peter Nicola from Victoria the racing is likely to be some of the best Late Model racing you are going to see all season. You can also throw Robbie Farr and Domain Ramsay into the mix, both of whom will have a big night as they perform double duty on the night (Farr Sprintcars / Late Models & Ramsay Late Models / Speedcars).

Finally, the Speedcars will also be on track and over the years Murray Bridge has produced some of the best Speedcar racing in Australia and Saturday night shouldn’t be anything different. The nomination list may be a little smaller than expected but it is full of classy drivers. Included in the 12-car entry is former National Champion Kaidon Brown, Matt Jackson, Dene McAllan, Travis Mills, Paul Murphy and local track specialists Robert Heard, Todd Wigzell and Brett Ireland.