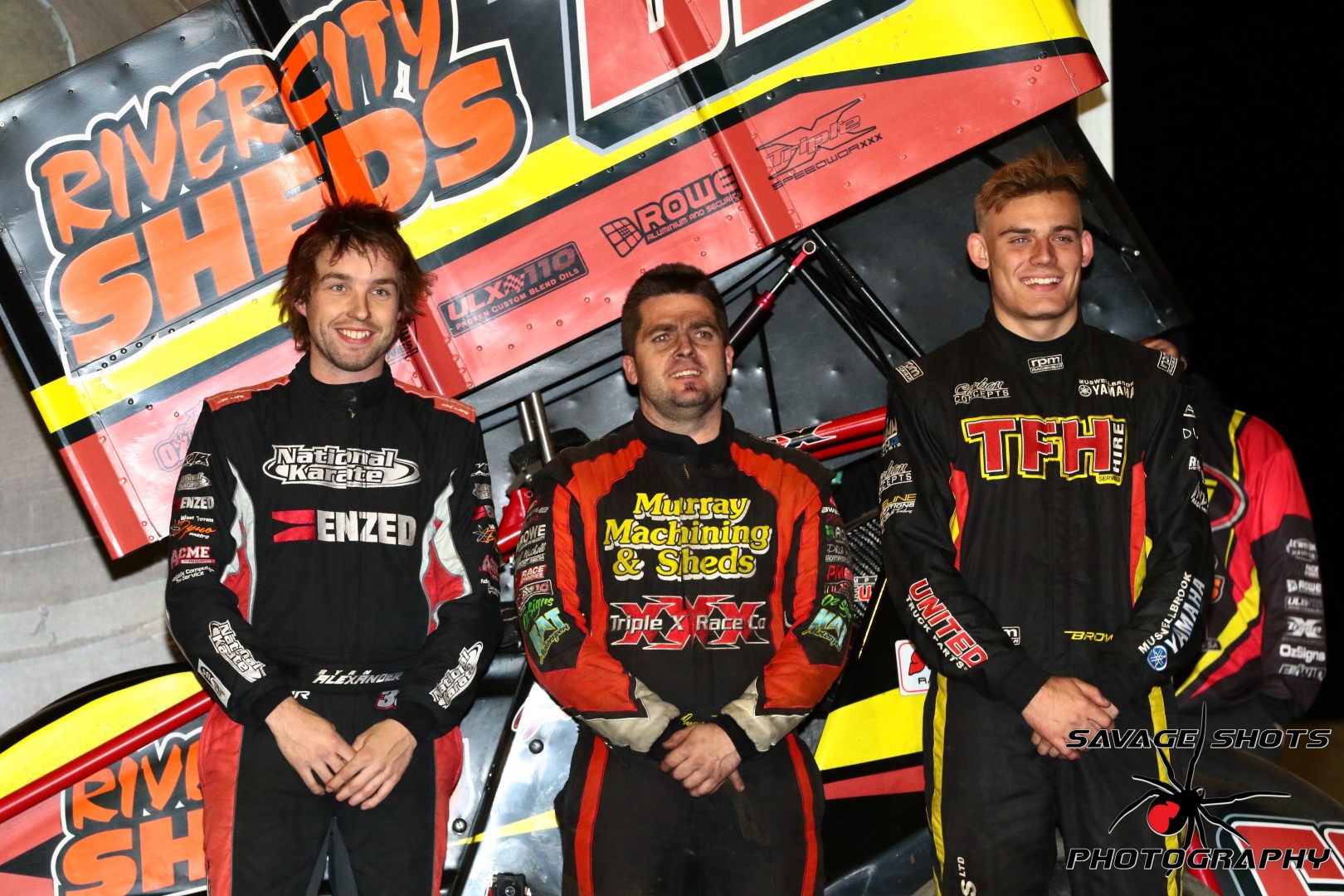 Round three of the Hi-Tec Oils Ultimate Speedway Challenge – Presented by Moore Plant Hire produced a high quality of night of Speedway action for the large crowd that packed into the Murray Machining and Sheds Speedway at Murray Bridge and they went home happy with two local racers taking out main events. Home-town hero Ryan Jones stormed to an empathic victory in the Bill Wigzell Battle of the Bridge Sprintcar main event while Ryan Alexander claimed the biggest Late Model feature race of his career. In the Speedcars it was Kaidon Brown who captured his third main event win in succession as he was a dominant winner after starting on the pole.

A field of 31 Sprintcar fronted for the opening round of the Ultimate Sprintcar Championship SA with the nomination list being bolstered by the late additions of Jamie Veal and Steven Lines, and in the early stages of the main event it appeared that Veal’s late decision to race at Murray Bridge would pay off.

After starting on the pole Matt Egel, who was going for four straight MMS feature victories, would lead the opening two laps before Veal slid by to take the lead. From this point it appeared that Veal would just go on and cruise to victory as he was railing around the top running the cushion with precision. But Ryan Jones, who was running with a damaged nose wing after being involved in an earlier accident, managed to run him down and performed an aggressive slider in turn four to take the lead on lap 14.

Once in front Jones was never headed and after starting from position 9, he went on to record his second “Wigzell Race” in what was a popular and a somewhat unexpected win.

“Jamie and his operation are world class from top to bottom. From himself to his family, crew and his equipment, put simply the 35 is the benchmark in this country. He wins a lot and he is the best going around, he wins 9 out of 10 times. Tonight, he raced fair and clean and I respect him for that, it’s great to race him straight up so to win against him is a great credit to my team” added Ryan following his win.

“Val and Darryl (Wright) do a lot for this race team and I can't thank them enough what they do” he added.

Attard would roll out of the event early in turn four while Dillon would crash out spectacularly on the back straight after duelling with Robbie Farr on the exit of turn two, the result taking out both drivers while running inside the top 5.

Scott Enderl was another driver who entered the upside-down club as be destroyed a chassis in a big crash in the B Main after an incident that also involved Lachlan McDonough, Mark Caruso and Craig Vanderstelt.

Former Australian Champion Kaidon Brown would lead the entire distance in the Speedcar main event but despite his dominance the race was still quite entertaining with the race for the minor placings producing some spectacular racing. In the end Victorian’s Nick Parker and Travis Mills would round out the podium with Matt Jackson, Todd Wigzell, Joe Lostitch, Robert Heard and Domain Ramsay completing the finishers.

Unfortunately due to the time constraints the Late Model feature was reduced to 20 laps, and with the track becoming extremely slick the race proved to be a race around the gutter with Ryan Alexander converting his front row start into a main event win over Victorian Cam Pearson, with another South Australian Andy Maxwell Jr completing the podium.

Fourth place went to Todd Bayley with Brad Smith, who fell back two spots in the final laps, completing the top 5. The top 10 was rounded out by Peter Nicola, Callum Harper, Lachlan Onley, Tim Pyke and Domain Ramsay.