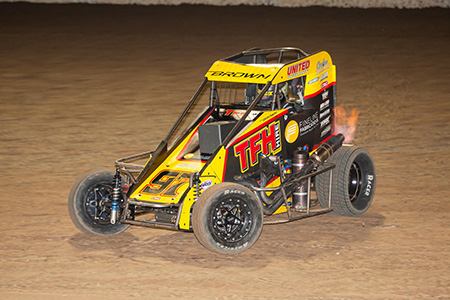 With the points battle really heating up in all three classes series leaders Cameron Pearson (Late Models) and Kaidon Brown (Speedcars) will look to extend their respective leads while
second placed Ultimate Sprintcar Championship racer Marcus Dumesny looks to vault into the lead after this weekend.

Pearson ran second to local hero Ryan Alexander at our sister track Murray Machining & Sheds Murray Bridge Speedway last weekend - the 20 year old from Healesville in Victoria has yet to score a major win like the 'Challenge' at Parramatta but he certainly has the equipment and the drive to turn that around this time.

Looking for some serious redemption is Tasmania livewire Callum Harper who had a disappointing weekend at 'the Bridge' by his own standards but returns to VR where he's a proven winner.

Fellow Tasmanian Brad Smith was one of the absolute standouts of last weekend and he was without question one of the fastest cars on track all night - a feat he'll look to continue this weekend.


Robbie Farr was a casualty early in the night in his Late Model and missed his second heat and A-Main so he'll be itchy to get back at it at VR where he was a last start winner in both
Late Models and Sprintcars. Farr's misfortune at Murray Bridge was not limited to the Late Model where he crashed out of the Ultimate Sprintcar A-Main.

Previous VR Ultimate Speedway Challenge main event winner Clayton Pyne (Late Models) returns to attempt back to back and it's good to see Camden veteran Darryl "The Grim" Grimson back in the saddle.

Victorian Peter Nicola is hopping for his best result yet in the Challenge with a break through podium or better.

Speedcar gun Matt Jackson has been trying to source a mystery engine ailment that has prevented him running at 100% and the team hopes that by Saturday they can solve it in order to give
him the best chance of preventing Kaidon Brown from scoring a rare 'four-peat' of successes after dominating his last three starts.

South Australian Speedcar speedsters Todd Wigzell and Robert Heard are both looking for redemption after Wigzell had qualified on the front row for the last round in Sydney but tragically hurt the motor.

Heard was fast again but had a big rollover on the back straight that will see him back this Saturday night to avenge that DNF.

Marcus Dumesny was rapid last weekend in Murray Bridge but one of the biggest impacts was that of Australian Sprintcar Champion Andrew Scheuerle who picked up a podium result and comes into this Saturday night with a third place spot in the points.

Central Coast racer Alex Orr was frustrated with his debut at 'the Bridge' but still sits in fourth place in the series heading into tonight.

Ben Atkinson will look to build on his impressive podium here for the last Challenge round as will fellow Rocket Industries supported racer and defending USC NSW Champion Sam Walsh.

The Sprintcar field is a wonderful collection of wide eyed throttle heavy rookies and steely gazed seasoned veterans with the runs on the board.

There are dozens of possibilities A-Main wise in the line-up with most looking for their first ever success and still many looking to build on a career that is already littered with success.

Main racing and the national anthem together with a tribute to Mike Raymond OAM will commence from 5.30pm.

If you can't make it to the track don't forget to log on to
www.clayperview.com in Australia and NZ and
www.dirtvision.com in North America and Canada!

Entries for Saturday night are: