50 IS NIFTY FOR ULTIMATE PINK NIGHT 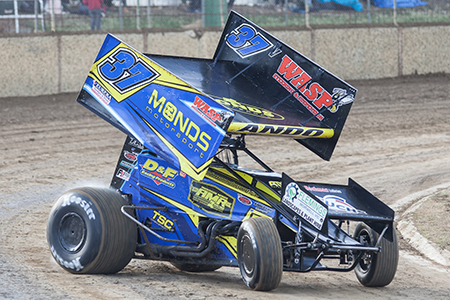 50 drivers have entered the fourth round of the Ultimate Sprintcar Championship on the Ultimate Pink Night this Saturday night at Valvoline Raceway Parramatta, presented by Aussie Forklift Repairs.

USC NSW Series leader Marcus Dumesny has a slight advantage over a field brimming with multi-generation Speedway racers as the Pink Night carnival atmosphere adds some extra colour to the racing!

Dumesny Jr has yet to score a feature race win this season though his consistency has been the hallmark of his racing - and his charges through the pack like fellow young gun Jessie Attard have been well worth watching.

"The Gun" Grant Anderson makes his long awaited Valvoline Raceway 2019/2020 debut in the iconic #V37 after having scored the first two SRA main event wins in Victoria to kick off his campaign.

Anderson is a danger man whenever and wherever the blue and yellow #37 arrives for duty and this Saturday night he'll be one of the pre-race favourites for sure.

The second generation hard charger from Albury in NSW is a welcome addition to the pits along with his legendary father David who was one of the pioneers of Australian Sprintcar racing in the formative years of World Series Sprintcars.

Already having won main events this season and looking to repeat that dose are Robbie Farr, Matt Dumesny, Jordyn Brazier and Daniel Sayre.

Robbie Farr comes off a win last Saturday night at our sister track Hi-Tec Oils Toowoomba Speedway for the QLD Ultimate Pink Night so his form is red hot.

The Ultimate Pink Night always brings out the best in teams as they dress themselves and their race-cars in lashes of pink to support the initiative that provides awareness and funds for the National Breast Cancer Foundation.

Many of the teams go above and beyond to raise money with their own auctions and merchandise sales to provide their own personal contributions to the cause.

Rookie Coby Elliott has been working on an auction for his front wing which is already up to the $450 mark and with sales of shirts the team is over the $500 mark to contribute to the NBCF Ultimate Pink Night resources.

This Saturday night's fourth round of the Ultimate Sprintcar Championship will be one of the most fiercely contested yet!

THIRTY TO GET DIRTY IN V8 DIRT MODIFIED SPECTACULAR FOR ULTIMATE PINK NIGHT!

This is surely the biggest sign yet that excitement is reaching fever pitch ahead of February's enormous 2020 Australian V8 Dirt Modified Championship at Valvoline Raceway.

The field is brimming with talent and after his recent back to back success former Aussie champion Scott Cannon comes in as pre-race favourite for Ultimate Pink Night honours.

HOWEVER the return of legendary Lismore second generation throttle smasher Mark "Krusty" Robinson is sure to set the cat amongst the clay pigeons come Saturday.

Victorian Brett Clarke too will be a serious smoky after his stirring win earlier this season in the #11 entry.

Having won two AMCA National A-Mains in a row at Valvoline Raceway in recent weeks Shane Cartwright now slides into the Paul Markulin #13 whilst Markulin subs into the #V0.

Father and son Chris and Royden Alcorn make the trek down from Kurri Kurri whilst Victorian young gun Todd Hobson keeps working on his improvement and familarity with the Valvoline Raceway layout.

Leading the Sportsman Points is Blake Eveleigh from Wayne Simpson in second and Paul Markulin third.