WALSH, ROBINSON, CAMILLERI AND CHAFFEY PINK IT UP 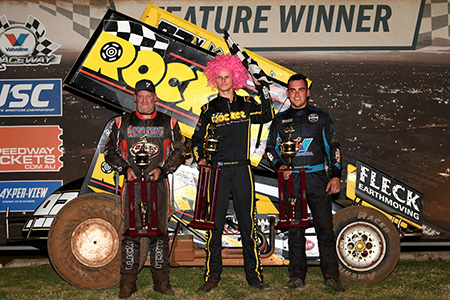 Sam Walsh was an unstoppable force in winning the fourth round of the Ultimate Sprintcar Championship NSW for Valvoline Raceway’s Ultimate Pink Night, presented by Aussie Forklift Repairs last night.

Walsh stormed the #92 Rocket Industries entry off the front row for the 30-lap A-Main and simply drove away from his rivals to score without challenge in a dominant performance.

Starting alongside the impressive Daniel Cassidy in the Challanger Kitchens #15 Walsh smoked through lapped traffic to win from a barnstorming Matt Dumesny who came from the seventh row of the grid to finish in second.

Robbie Farr, who admitted that he struggled early, soldiered back to third place by the fall of the chequers to lead home points leader Marcus Dumesny in fourth and Ben Atkinson rounding out the top five.

Daniel Cassidy wound up an eventual eleventh which was not a true reflection on his speed and form throughout the night.

DNF’s were Alex Orr (who had moved up to second place and was looking spectacular as always before he pulled the Meander Village #43 out after an apparent issue with the car.

Blake Skipper was also a DNF and James Duckworth unfortunately flipped the #68 in turn two.

Mark Robinson brought Scott Cannon’s win-streak at VR to an end with a solid performance in the Castrol Edge #9 as the Lismore hard charger scored his first main event in recent memory at the iconic Parramatta venue.

The pair of former Aussie champions duked it out between them as Cannon tried valiantly to secure a hat-trick of Valvoline Raceway successes but a young kid from Nyora named Todd Hobson was proving to be a real fly in the ointment for the two superstars.

Robinson eventually pull slightly clear through lapped traffic late in the 20-lap affair, but Cannon gave clear notice that will be a major threat to the national title in February.

Hobson was superb in third place upgrading his wild card status and putting a grin on his legendary Dad Lloyd’s face.

Brayd Stephenson was lightning fast late in the race for fourth ahead of Mark Griffiths in fifth, the livewire Royden Alcorn in sixth, Wayne Simpson seventh, Zak Blanch in eighth, Trevor Blanch ninth and Brendan Wakeman rounding out the top ten.

Liam Camilleri scored his first win of the season in a typical arm wrestle between at least fix main protagonists throughout the nailbiting originally 20-lap feature race.

Unfortunately with the time curfew drawing ominously near and a number of late race stoppages the race had to be declared with just the fifteen laps that had been run.

Jacob Griffin was a standout with some barnstorming runs deep into three and finished up with a solid second behind Camilleri.

Vastly improved Canberra lady racer Ashley Hodak put in a career best drive to score the final spot on the podium with some scintillating passes on the outside.

Troy Bolton was also right in the mix but was deemed to be a DNF as part of the final caution light on lap fifteen robbing him of a very rewarding finish.

Peter Chaffey was a jubilant, euphoric and slightly crispy winner of the Fender Bender A-Main when his beloved #29 erupted into flames in the last fifty metres of the A-Main.

The affable Chaff emerged from the inferno sporting a huge grin and a look of amazement on his face as fire crews doused his car but not his victory!