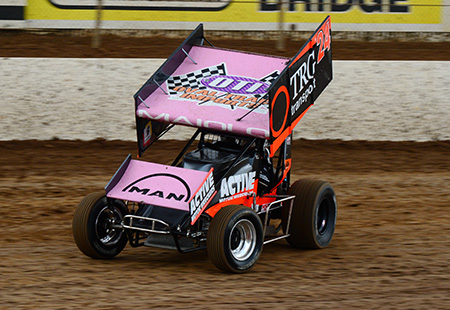 The Murray Machining and Sheds Speedway at Murray Bridge will hold it’s annual “Ultimate Pink Night” supported by Autopro Murray Bridge this Saturday Night with the night featuring Round 2 of the Ultimate Sprintcar Championship SA, Wingless Sprints, Modlites and Late Models. With the night supporting the National Breast Cancer Foundation all Women can enjoy the evening for FREE in the General Admission area with only a gold coin donation required in support of the National Breast Cancer Foundation.

Round of the Ultimate Sprintcar Championship SA will see some of the best dirt track drivers in Australia in action with dual Australian Champion James McFadden making his first appearance at Murray Bridge since his most successful overseas campaign. While racing for Kasey Kahne McFadden captured the 360 Nationals at Knoxville in addition to several Allstar main event victories. Already this season he racked up four feature race victories including wins at Northline, Warrnambool, Avalon and Borderline Speedways.

Local racer Ryan Jones enters round 2 of the series as the points leader courtesy of his win at the “Bill Wigzell Battle of the Bridge” and with the drivers who are currently second and third in the points not racing his nearest rival will be Matt Egel, who is 12 points back.

Egel has a win to his credit at Murray Bridge this year and he came close to a second last Saturday before crashing out in the Allstars main event after contact with a lapped car.

Current and two time Series Champ Robbie Farr will join the field once again and he will be looking to bounce back after crashing out of the opening round. Farr was third last weekend at the Valvoline Speedway at their edition of the Pink Night.

Marcus Dumesny will saddle up in the Wayne Rowett owned #47 and he will be out to claim his first Murray Bridge victory while the likes of Daniel Pestka, Aiden Hall, Keke Falland, Glen Sutherland, Steven Caruso and Ricky Maiolo will also be out to add their names to the USC SA winners list.

The Modlites will enjoy their first run at Murray Bridge for the season with a strong nomination list of 15 competitors while the night will also see a small field of Late Models and Classic Sprintcars on the program.

So, dress up in you best pink outfit and head to Murray Bridge this Saturday night for the “Ultimate Pink Night” in support of the National Breast Cancer Foundation.

On track action this Saturday night will begin at 5pm with Wingless Sprint track packing before the opening Modlite heat of the night scheduled for 5:20pm. Sprintcar engine starts and hotlaps / qualifying will begin at the later time of 7:30pm.