THE CHALLENGE IS THROWN DOWN AS CALIFORNIAN MACEDO ARRIVES EARLY 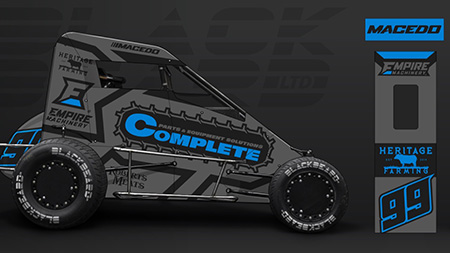 This Saturday night’s Hi-Tec Oils Ultimate Speedway Challenge at Valvoline Raceway Parramatta has attracted a stellar line-up of Ultimate Sprintcars, Speedcars and Late Models in the final event before Christmas.

And Santa is handing out the presents early with Californian Carson Macedo arriving two weeks early ahead of Speedweek to get his eye in with the immaculate Dyson Motorsport Sprintcar and Speedcar.

Macedo will do double duty running both classes as he gets some laps in with the state-of-the-art cars in a night that will prepare him perfectly for the Ultimate Sydney Speedweek kick off on December 26.

The 2019 World of Outlaws NOS Energy Sprintcars Kevin Gobrecht “Rookie of the Year” recipient is no stranger to Valvoline Raceway in a Sprintcar but will relish the chance to run with Sydney’s best Speedcar pilots in his new King chassis.

The former Keith Kunz Motorsport pilot from Lemoore California faces a torrid line-up this Saturday night however with a field that is chock full of potential A-Main winners.

Matt Jackson is on a mission this season having won five main events between Sydney and Murray Bridge and he along with the globe-trotting Kaidon Brown have been commanding the lion’s share of victories at VR this season so far.

Ramsay will do double duty in his Speedcar and his Late Model as he continues to learn more and more about the tricky prospect of the radical wedge sedans.

The Late Models have brought together a field that again includes combatants from Victoria, South Australia, Queensland and New South Wales and realistically at least ten of the 19-car field could walk away with the A-Main win.

Tasmanians Brad Smith and Callum Harper have been rapid, Victorian Cam Pearson has a big chance to get his first Sydney breakthrough result, Newcastle’s Nathan Disney can win without notice, as can Sydneysiders Darryl Grimson, Ben Nicastri, Clayton Pyne and even rookie Andrew Espener who landed a massive career first victory at the last Challenge round in Sydney.

Throw in Central Coast star Ryan Fenech in the Bruce Mackenzie car and Robbie Farr in the Hi-Tec Oils #7 Longhorn and you have the makings of a tremendous night.

CRACKING GROUP IN THE SPRINTCARS

In the sprintcars, this Saturday night’s fifth round has brought together a crack group of cars from the USA, Queensland, the Northern Territory and New South Wales.

Marcus was dealt a brutal blow in last Saturday night’s Ultimate Pink Night at our sister track Murray Machining & Sheds Speedway where he was dominating the 30-lap A-Main.

Two about to be lapped cars (he was lapping up to sixth at the time) tangled in front of him and he was tagged and caught up in the melee where he stalled.

Starting from sixth at the restart and with only a handful of laps to go he worked his way back into the top five but it looked certain that the youngster would smash the 30-lap record in the process prior to the crash.

The youngest Dumesny will be out for revenge this Saturday night.

Californian Carson Macedo will be all fired up in his new Dyson Motorsports #99 Complete Parts and Equipment Solutions KPC as he prepares early for the Ultimate Sydney Speedweek kick off on December 26.

Australian Sprintcar Champion Andrew Scheuerle heads down from Queensland to take on the VR stars and despite a flip in the previous Parramatta round “Shirls” has been in excellent touch and rates as a chance to score the A-Main win.

South Australian throttle smasher Ryan Jones returns for another look at Valvoline Raceway and after his top ten result a fortnight ago here and his top four finish on home soil last weekend he has plenty of speed.

NZ racer Brett Sullivan continues his improvement in the Hydraulink #69 and Victorian Andy Caruana (who made it straight into the A-Main on Ultimate Pink Night) will also return in his pink and white #96.

The field is littered with young hopefuls and established veterans alike as everyone uses this Saturday night’s Challenge as their final hit-out before the Ultimate Sydney Speedweek blast off on December 26.

Last start feature winner Sam Walsh was completely dominant in his Pink Night victory and looks to go back to back.

The possibilities for A-Main victory and filling the podium spots are endless this Saturday night.