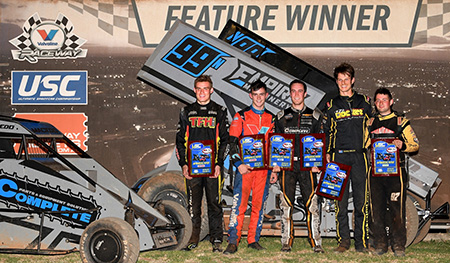 Californian Carson Macedo is only the third driver in the 42-year history of Valvoline Raceway to win a Speedcar and a Sprintcar A-Main on the same night.

He leapt out of the Speedcar in victory lane and was given a ride to the pits where he strapped straight into the Sprintcar.

“I can’t thank this team enough, the cars I’ve driven tonight are two of the best in the world,” Carson admitted at the end of the night, “I can’t thank Sean and Felicity and their entire team enough. The cars were better than I was a lot of times and I made a few mistakes but it’s great to get these wins for the team and a great way to start off our season here in Sydney.”

Macedo began the CEJN Pty Ltd Speedcar A-Main from the front row alongside Matt Jackson and despite a late race restart epic slide job challenge from Nathan Smee he was never headed.

Having King chassis guru and Super Kiwi Justin Insley in the pits wrenching the #99 was definitely a handy advantage.
Macedo took the win from Kaidon Brown in second place and Matt Jackson taking up the final step on the podium.
Nathan Smee was fourth and Todd Wigzell flew under the radar to finish fifth.

The A-Main was classic top shelf Speedcar stuff at VR with slide jobs, multiple lanes and massive position shuffles throughout the 30-lapper.

Macedo had to come from much deeper in the pack to score the Ultimate Sprintcar Challenge victory starting on the fourth row and having to effect a blitzing lowline pass on majority leader Sam Walsh in the dying laps of the 30-lap feature.

Marcus Dumesny sped the Valvoline #47 from the fourth row alongside Macedo to storm into second place ahead of Sam Walsh third, Jackson Delamont fourth and Ben Atkinson rounding out the top five.

Delamont was particularly speedy on the low side getting as high as second place at one point from his original third row start spot.

Ben Atkinson moved to second behind Sam Walsh for the early laps looking like a 1-2 for the Rocket Industries / Aeroflow sponsored cars might be possible but wound up with a top five for another consistent result in one of his best starts to a season in some time.

Troy Little flew under the radar to come from tenth for sixth, whilst Daniel Sayre faded to seventh after starting on the front row alongside Robbie Farr.

James Thompson came from fifteenth to eighth, Michael Stewart from eleventh to ninth and South Aussie Ryan Jones recorded another top ten finish after coming from the sixth row.

Ben Atkinson Jr recorded a career best eleventh place finish after earlier out qualifying his Dad Ben with quick time and starting alongside him on the front row of the heat.

In other news Santa Claus sped the Australia #1 J&J he borrowed from Andrew Scheuerle to win the “Santa Dash” despite the best efforts of Luke Stirton and James Duckworth to take away the victory from the North Pole nightmare in the #1, much to the delight of the kids in the audience.

Central Coast Late Model second generation hard charger Ryan Fenech was an ecstatic winner of the main event and survived a bruising affair that combined, high speed, bold manoeuvres and some bone jarring wrecks to win his first feature race in some time.

“I’m so excited to finally get back up here,” he yelled, “it’s been way too long. I can’t thank my car owner Bruce Mackenzie enough for the opportunity to drive this fantastic race-car.”

Fenech was elevated to the front row from the second row for a complete restart when Victorian Peter Nicola was deemed to have jumped the start and engaged in a torrid early race battle with fellow front row starter Robbie Farr.

Lachlan Onley survived a multiple car wreck that nearly took out Tasmanian Brad Smith as well with Smith somehow continuing on despite a car that looked like it from the Transformers movie.

Onley finished third behind Robbie Farr for second with Victorian young standout Cameron Pearson also pulling off a Houdini to claim fourth place ahead of Smith.

A disappointing omission from the A-Main line-up was Callum Harper who was an unfortunate withdrawal early in the night with engine issues.