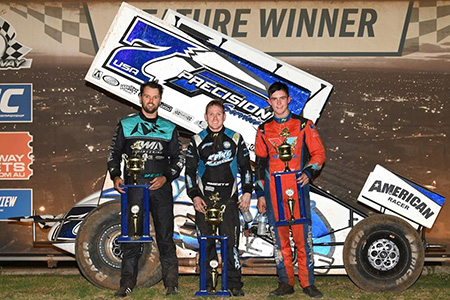 An enormous crowd turned out to see Californian Brad Sweet win his third Valvoline Australian Sprintcar Grand Prix at Valvoline Raceway Parramatta tonight in one of the best feature races seen at the venue in some time.

The 2019 World of Outlaws champion was in stellar form wheeling the #USA7 American Tire & Racing Services Spike chassis to victory over a fast finishing Jamie Veal in second place and Marcus Dumesny third.

Sweet and early leader Sam Walsh engaged in a torrid battle for the lead for most of the 35-lap affair with the pair swapping slide jobs much to the delight of the huge crowd in attendance.

Walsh would eventually finish sixth but his speed and ability to duke it out with the world’s #1 driver impressed both Sweet himself and the fans in attendance.

“American fans might not know names like Sam Walsh and Marcus Dumesny yet but they will do,” Sweet conceded, “I have so much respect for the guys who race here week in and week out. I’m really looking forward to racing here for the next few nights of Speedweek.”
Carson Macedo made a late play for the top three but came up one spot short behind Dumesny.

Michael Stewart came from deep in the field to finish a creditable eighth place ahead of Robbie Farr who came from the B-Main to finish in ninth.

2019 All Stars Circuit of Champions champion Aaron Reutzel was set to play a major part in the A-Main after looking seriously fast in qualifying and his heat only to roll over in turn three and four on the opening lap.

Reutzel’s teammate Mick Saller set a career best quick time in qualifying in the #56 KRGS Triple X and Reutzel set the quickest time in his group which got the team off to a great start on debut.

Texan Tyler Erb was a jubilant victor in the first round of the Ultimate Sydney Late Model Speedweek taking the honours from Ben Nicastri (in the throwback #3 colour scheme that tributes his Dad Ross’ NASCAR Late Model from the late nineteen eighties) in second and Victorian Cameron Pearson home in third.

Tasmanian supremo Callum Harper led early and looked to conquer his VR demons but Erb put a sweet outside move on him going into turn one and pulled away never to be headed in the HDD Racing Rocket chassis.

A-Main Speedweek Round One Official results:

Shaun Davoodi drove a smooth and calculating race to lead home two leadfoot ladies and win the Street Stocker A-Main despite the best efforts of Sarah Bradley and Kiona Sunerton in second and third place respectively.