SWEET AND MACEDO DOUBLE UP IN VALVOLINE RACEWAY THRILLERS 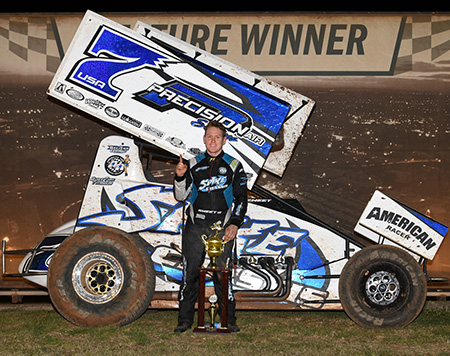 Americans Brad Sweet and Carson Macedo doubled up on their A-Main successes tonight in Ultimate Sprintcars and Speedcars respectively on a spectacular but challenging night at Parramatta’s Valvoline Raceway.

Sweet backed up his Boxing Day night success with a nail-biting win in the 35-lap A-Main to narrowly defeat Jamie Veal and Carson Macedo in second and third respectively.

It was Sweet’s second win and Veal’s second runner-up finish in as many rounds of Speedweek so far.

Macedo backed up his Speedcar A-Main success on December 14 for the Ultimate Speedway Challenge round with a stirring win over Sam Walsh and Michael Stewart.

Had he won the Sprintcar A-Main also he would have become the only person in the 42-year history of Valvoline Raceway to win ‘double duty’ on two separate occasions.

The Speedcar podium was filled by drivers doing ‘double duty’ in Speedcars and Sprintcars with Sam Walsh impressing all present with a fantastic drive for second in the Brett Morris owned TRD powered King chassis.

Walsh and Macedo traded passes for much of the main as Michael Stewart, Matt Jackson and “Uncle” Nathan Smee and nephew Harley went at it.

Troy Jenkins was a top four proposition as well before a flat left rear tyre on the “Swap n Go” #78 ended his race prematurely.

The ‘evens’ A-Main in particular was one of the most entertaining races of the season with a stirring three wide late race battle between Mildura duo David Smith and Jacob Drewett with Max Clarke sneaking through for the victory on the final lap.

Brad Sweet came from the second row of the grid to win the Ultimate Sprintcar A-Main but not without an absolutely torrid battle with Jamie Veal for much of the race.

Macedo started on the front row with Marcus Dumesny but it was Veal who looked the raciest early.

Texan Aaron Reutzel really had his six shooters out with a blazing run in the Saller Motorsport Triple X and he pulled off a Houdini 360-degree spin in turn two whilst challenging for the top three after clipping a left rear with his right front only to loop it again shortly after bringing on the yellows.

Sent to the rear Reutzel literally screamed back to sixth by the fall of the chequers in a barnstorming run in the new car the team put together after the chassis was destroyed on Boxing Day.

Marcus Dumesny continued his consistency with a top four result which will no doubt preserve his lead in the USC NSW Championship as Round Three of Speedweek looms this Monday might December 30.

Robbie Farr came from the fifth row to score fifth at race’s end while Alex Orr was looking every bit a chance for a podium before eventually finishing in the American Tire & Racing Services “Lucky Sevens” position just behind Reutzel.

Grant Tunks placed eighth with Lynton Jeffrey in ninth and Ian Madsen barely scraping through for the transfer from the B-Main with a deflating right rear tyre to run top ten in the A-Main.