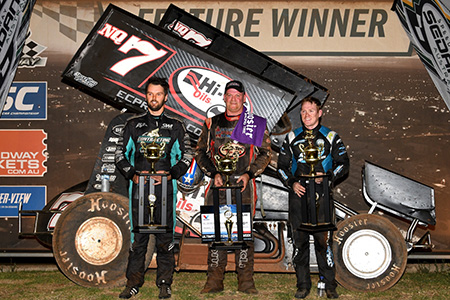 On triple title night each A-Main was a belter as the Ultimate Sydney Speedweek juggernaut rolls into the halfway mark at Sydney’s Valvoline Raceway.

Farr claimed his career third NSW Sprintcar title whilst for Raymont and Onley it was a career breakthrough moment for the pair of them at the iconic Sydney venue.

Farr set quick time, won his heat, won the Pole Shuffle and then survived several determined attempts to take his lead away over the 35-lap distance after starting on the front row with Jamie Veal.

Texan Aaron Reutzel, Californian Brad Sweet, Marcus Dumesny and Veal all had their attempts to wrestle the point from Farr but the biggest surprise came from Jackson Delamont.

Though he would finish fourth eventually Delamont was a legitimate chance for victory as he ripped around the kerb line to dispose of several heavy hitters including Reutzel, Sweet and Veal as he set off after Farr.

Veal came after Farr late in the race several times but came up agonisingly short to record his third consecutive second place finish in as many rounds of Speedweek.

Delamont came from tenth on the grid to place buy ivermectin 12mg fourth whilst Brad Sweet pedalled to third after starting on the outside third row.

Marcus Dumesny was again consistent finishing sixth but the talented third generation racer was as high as second place at one point early.

Mick Saller came from twenty second to a stirring ninth place finish in one of his best results to date.

Alex Orr had his chances from fourteenth to record an eventual twelfth but not before he’d climbed much higher into a possible top five result mid-race.

One of the highlights of the race on a personal level was that of Mick Matchett who made the A-Main straight in and finished 16th after what has been the saddest month of his life losing wife Pauline to breast cancer earlier in December.

Late Model NSW Champion Lachlan Onley was sporting a grin as big as his hometown of Orange after he swept to victory with a faultless drive to win his first ‘big one’ over a crack field in the 30-lap feature race.

It was Texan Tyler Erb who went into the race as favorite lining up alongside ‘super-sub’ Ryan Fenech (guesting in the John Lodge #28 that was ironically his old car) on the front row.

Erb led early and that was where most thought the results would stay but Onley stunned them all with an early pass that quickly opened up to a decent lead while Erb and Fenech began duking it out for the runner-up spot.

Clayton Pyne made a welcome return to form and began harassing for a podium or possible win as a battle raged between the in-form Ben Nicastri, Nathan Disney, Tasmanian Callum Harper and Victorian Cameron Pearson.

Try as they might though nobody would affect a pass on Onley’s #17 entry as he steered straight and smart to hold on to the lead and the eventual win in a career high moment at Valvoline Raceway.

Fenech was smashing down the cushion on the top side whilst Erb ran the low side and the middle combination to eventually run third behind Fenech.

Smith wasn’t done there however and with a late race caution he began to have one last crack at Raymont’s claim for NSW title glory using the low-line to near lethal effect.

Raymont was committed to the cushion and pushed the Cooroy Q28 to the limit to hold on narrowly from Smith and Shelford.

Shelford was a revelation in the Commodore and nearly caused a boil over but third place was a fitting result also as he fought through a torrid battle pack including Justin Drew, Cameron Waters, Victorian champion Daniel Simpson and Toowoomba’s Shane MacDonald.

The racing was at times three and even sometimes four wide in the Modified Sedans and the teams seemed to enjoy their debut at VR as much as the fans appreciated the uncompromising action they put on.

The next event at Valvoline Raceway is on Wednesday, January 1 with the fourth round of the Ultimate Sydney Speedweek for Sprintcars, the 69th Australian Speedcar Grand Prix and the first appearance of the Production Sedans.