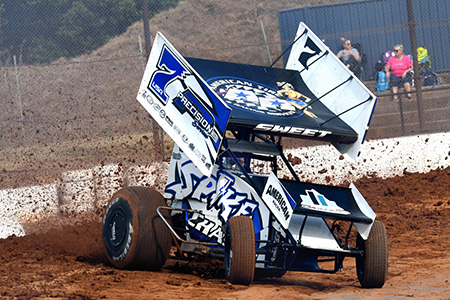 Sweet came from the third row of the grid to sweep past fellow American Aaron Reutzel and take the 35-lap victory from the Texan in second and the ultra-consistent Marcus Dumesny third.

Jamie Veal set quick time in qualifying, won his heat and the Pole Shuffle but came home fourth in the SWI Engineering Maxim as the Warrnambool second generation racer looked to break his run of three consecutive runner up positions.

Macedo, Sam Walsh and Lynton Jeffrey had a titanic battle for much of the race.

Ian Madsen began showing the speed expected of his talent in the DTM Motorsport #4 and began his play for a certain podium behind Jamie Veal stromectol no prescription when the second motor in as many rounds tragically detonated.

Daniel Cassidy came from third in the B-Main to run a solid fourteenth in the A-Main.

Jamie Veal led early and looked like a main event win was finally in his grasp before Aaron Reutzel, Brad Sweet, Ian Madsen and Marcus Dumesny began to make their respective plays.

Sweet edged out to the lead but Reutzel was a definite chance for victory also as the top five weaved through dense lapped traffic.

Some of the world’s best open wheel drivers have won the Australian Speedcar Grand Prix and now Carson Macedo is one of them.

Nobody could hold a handle to the Lemoore born and bred Californian who started on the pole in the 30-lap A-Main and was never really challenged to lead home Matt Jackson in second place and Nathan Smee third.

The battles behind Macedo were of little consequence (though they were spectacular) as Macedo surgically slashed his way through the middle, the outside and the inside of lapped traffic on a multi-lane Valvoline Raceway surface.

Matt Jackson and Nathan Smee carved each other up lap after lap in their tussle for second place but as entertaining as that was it only served to allow Macedo more room to breathe out in front.

DJ Raw came from third in the B-Main to grab fourth with a fantastic drive, Dean Meadows “rolled from the B-Main win to fifth in the A-Main (his young son Chase’s words exactly) with a ripping performance and Dan Biner had one of his personal best performances coming home in seventh (even looking like a possible podium finish at one point.