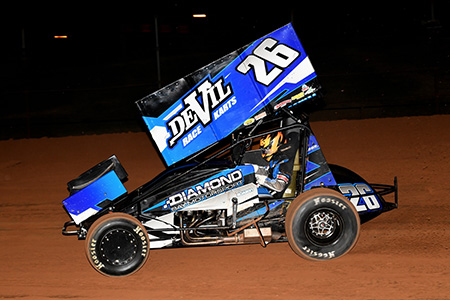 Californian Cory Eliason became the 33rd American to win a main event at Valvoline Raceway but that honour nearly went to Aaron Reutzel in the last two laps of an electrifying 35-lap fifth round of the Ultimate Sydney Speedweek.

Eliason cowboyed the Diamond Bay Motorsport #26 to victory lane ahead of an Uncle Sam grand slam where the first four placings were filled by Americans.

And to top it off Texan Tyler Erb dominated the 25-lap Late Model main event as well!

Eliason looked to be home and hosed with only a handful of laps remaining but the 2019 All Star Circuit of Champions winner came on like gangbusters to start running him down.

With only two laps remaining Reutzel came alive and attempted a last lap pass on the top side in turn two that almost paid dividends for the Texan.

Eliason had very much earned his chance at victory however after surviving an incredible battle for supremacy with early leader Carson Macedo, Reutzel and Brad Sweet with Robbie Farr also applying significant pressure.

Macedo led early but Eliason steamed through into the lead whilst the four Americans arm-wrestled their bucking steeds through the maze of lapped cars.

“I can’t tell you what it means to get a win here,” smiled Eliason after the race, “I really really wanted to be someone who can look back and say I won at Parramatta. I can’t thank my team enough for all of the hard work they’ve put in. The Stathy family have invested a lot in my racing in Australia and it’s great to pay them off with a win tonight.”

Ben Atkinson came from the sixth row to finish in sixth place behind Robbie Farr who was the first placed Australian at the chequers in fifth.

Brad Sweet had one major chance to lead on lap seven when he swept from position five to first in less than a lap before McKenna Haase brought on the cautions and the restart saw the 2019 World of Outlaws Champion back on the outside second row.

That was really the last chance he got at his fourth win from five starts at VR.

Marcus Dumesny blitzed from position nineteen to an incredible eighth place right on the hammer of fellow third generation racer Jessie Attard in eighth who had himself started on the outside seventh row of the grid.

South Australian Ryan Jones continued his good form running sixth for many laps before fading to ninth ahead of Grant Tunks rounding out the top ten.

Lynton Jeffrey finished eleventh ahead of Michael Stewart who drove from position eighteen to an eventual twelfth with Mick Saller thirteenth (coming from the B-Main) Jackson Delamont and McKenna Haase.

Quick time overall went to Cory Eliason with a 12.208.

Texan Tyler Erb proved he was just too good and too damn fast by winning the 25-lap A-Main finale of the Ultimate Sydney Speedweek for the Late Models leading team-mate Cameron Pearson home in second for a great 1-2 for the HDD Team.

Erb was masterful on the restarts and despite the best efforts of the rapid Ben Nicastri, Pearson, Tasmanian Brad Smith and even Todd Bayley at times the Texan was an unstoppable force in the HDD Rocket #91.

In winning the A-Main Erb also wrapped up the Speedweek Series as the team now trucks across to Western Australia for the National title at The Perth Motorplex and the USA invasion tour for which Erb is the defending champion.

Tasmanian Brad Smith gave ‘the kids’ something to think about with a gutsy third place finish while NSW champion Lachlan Onley had some chances but never really got going to match the speed of Erb and Pearson.

Clayton Pyne was unluckily caught up in an incident when Erb spun that did considerable damage to the #9 Rocket.

Callum Harper had a soul-destroying night blowing his fourth motor for the season in the Wylie Tiles #22 Black Diamond whilst Nathan Disney unfortunately hurt the motor before even firing a shot for the night.

Todd Bayley showed some real speed with the borrowed Ed Borg motor but unfortunately caused two restarts and was unable to take part in the third.

Valvoline Raceway wishes to thank the fans, the teams, our crash crew, our team and everyone associated with tonight’s event for their patience, their persistence and their dedication to the end result.

Sydney’s West’s temperatures seared but the track crew did a phenomenal job to provide a fantastic racing surface despite the difficult weather conditions.

The next event is scheduled for Wednesday, January 8 and is an ‘old school’ Sprintcar night not associated with the Ultimate Sydney Speedweek itself.