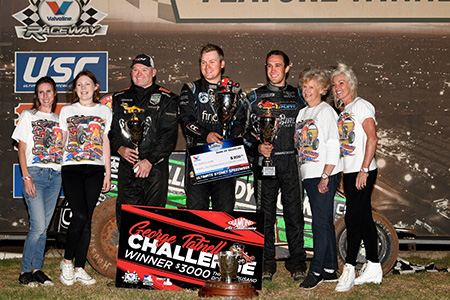 Macedo nearly created history by winning both of the A-Mains only coming up one position short in the Speedcar A-Main after starting at the rear of the 21-car field.

The margin of victory was a ridiculously skinny 0.094s for Stewart as he and Macedo actually made contact only feet before they crossed the finish line.

They may have even crossed the line in the air after the bump.

Macedo took a challenge from VR management after the January 1 event (a hat-trick at that point) that would see him double the $3000 winner’s cheque if he began the 25-lap feature from the rear of the grid and won.

Alone on the eleventh row of the grid tonight Macedo began immediately picking his way through the field whilst Michael Stewart, Sam Walsh and Nathan Smee began duking it out for the lead.

At times through dense lapped traffic the lead was up for grabs as the lead trio went at it with Matt Jackson and Harley Smee trying to make their way into podium contention.

Macedo was a whirlwind from the rear and had one last crack at Stewart’s #51 with the lead duo making fairly solid contact as the chequers flew.

The crowd reacted wildly to one of the best Speedcar races seen in some time as Stewart was finally able to wrap up his first main event win of 2019/2020.

Macedo’s second place finish was enough to wrap up the Ultimate Sydney Speedcar Speedweek and Nathan Smee was a rock solid third place ahead of the again impressive Sam Walsh and Harley Smee rounding out the top five.

Carson Macedo was finally able to get the elusive “W” in the Dyson Motorsport #99 KPC after starting on the front row of the 35-lap GT Challenge Sprintcar A-Main alongside Jamie Veal.

Veal had been lightning quick all night in the new SWI Racing #35 Maxim and the Warrnambool wizard literally hit the ground running as he opened up a healthy advantage in the feature.

Macedo tucked into second whilst SA’s Ryan Jones settled into third early before the red lights came on three laps in when Jordyn Brazier and Brad Sweet collided in turn one and Brazier unfortunately rolled.

Sam Walsh withdrew the #92 with six laps in whilst Marcus Dumesny made a play for second with a ripping pass to move by Troy Little and Carson Macedo only to see the Californian rip back to second half a lap later.

With twenty-one laps to go Ian Madsen and Cory Eliason brought on the caution lights and light rain began falling.

At the restart Troy Little and Marcus Dumesny made contact into turn one with the caution lights coming on and Little being sent to the rear.

Robbie Farr began working the top side to move forward whilst Brad Sweet had earlier been disqualified for a pit/work area infringement and suddenly Jackson Delamont began to take flight towards the leaders.

A red light pause was called for fuel as the field reached almost seventy laps under green and yellow.

With nine laps to go Macedo made a pass on dominant leader Veal only to see the #35 return the favour and the Macedo car made contact as the pair raced into turn three one lap later with it all on the line.

Marcus Dumesny suddenly had Macedo in his sights and it looked like the young Sydneysider might get his first A-Main win of the season.

Texan Aaron Reutzel had won the B-Main from the rear of the field (after his top wing panel fell off in his heat) and then powered from 21st to fourth with only four laps to go in the A-Main before pulling off a 360 degree spin coming out of turn two that may have been caused by fluid from his own car.

Jackson Delamont had pulled his usual ‘under the radar’ effort to race to third behind Dumesny and Macedo but then chaos ensued in turn three and four as Reutzel and Veal made contact with Veal’s gorgeous new Maxim ending up upside down.

The top three finishing results are confirmed however the remaining positions are provisional until further stewards’ investigation.

Marcus Dumesny’s consistency throughout the series saw him wrap up his first ever Ultimate Sydney Speedweek and although he wasn’t able to win an A-Main battle he certainly did win the war in the Valvoline #47.

The B-Main was won by Aaron Reutzel from the rear over team-mate Mick Saller in second, Grant Tunks in third and Max Dumesny fourth in the final transfer position.

Liam Camilleri was a jubilant winner in the Legend Car A-Main after proving a little too elusive for the snarling pack behind him despite many yellow light stoppages that allowed the field to close up on him.

The only black car in the top seven looked like it was being pursued by a band of rogue white stormtroopers all painted in white with Matt Ferguson, Jacob Griffin, Robert Rawlings, David Browne and Shane Anderson all hot on his heels.

Troy Bolton stormed to third in the end behind Ferguson and race winner Camilleri in an event that rounded out some brilliant Legend Car racing throughout the night.

The next event for Valvoline Raceway is Friday and Saturday night January 17/18 for the Ultimate Speedway Nationals.