ULTIMATELY IT'S ONE EPIC FIELD!! 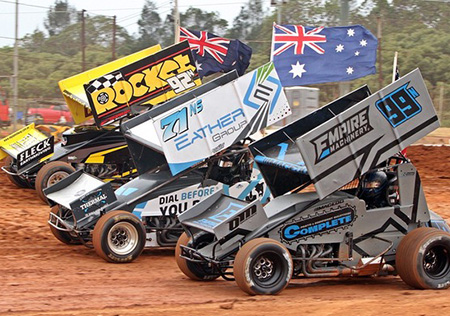 It's a crack field of stars from the USA and all over Australia trying to grab the $20,000 to win Ultimate Speedway Nationals A-Main this Friday and Saturday night!

They're spread across all the States and Northern Territory.

When you look down the line-up there are at least 15-20 cars that can either cause an upset or dominate the proceedings.

Here’s a brief form-guide synopsis of just a few of the entries below.

James McFadden won last night in Lismore after a ripper drive from the fourth row of the A-Main. He's leading the WSS points and seems to be able to pass cars from any point on the track or the field.

Corey Eliason had a fantastic runner-up finish at Lismore's WSS last night after flipping a coin with car owner Stephen Stathy as to whether they'd go or not.

Kerry Madsen must win. It's a matter of time. He's been close on WSS several times. Is this weekend his time?

Ian Madsen is due in the DTM Motorsport entry. It's a matter of time before he busts free like his big brother Kerry.

Californian Kalib Henry is a surprise packet. He won here on debut admittedly on "Old School" night but he looked smooth and fast when he did.

Danny Reidy is the most consistent we've seen in many years from the Alice Springs born Gold Coast based speedster.

Lynton Jeffrey is surely about to break free and get to the front of the field.

Ben Atkinson has been lightning fast. Is this his weekend?

Cody Maroske has a gorgeous car and has shown speed at Archerfield and Toowoomba.

Max Dumesny will find the top ten, maybe even the top five. He's capable of surprising the field and getting up and about.

Robbie Farr is one of the pre-race favourites - no question. His speed is right there. This team wins.

West Aussie Jason Kendrick is making his 2020 debut at VR - in fact it's been some time since the Kendrick operation has been to Sydney. He'll be on the pedal no doubt.

Daniel Sayre is always under the radar and always fast.

Jackson Delamont too is like a stealth bomber who always seems to find a good groove and a way to make it work for him.
He could win. He can.

Tasmanian Shaun Dobson is a welcome stick of dynamite. Can he light the fuse?

Jamie Veal. What can you say? Bullet fast. It's unimaginable that he hasn't won yet. It HAS to happen.

Grant Anderson. A proven rocketship. A proven winner. Welcome back.

Jessie Attard. Things have to change. He's fast but has lacked consistency and a break. Maybe this time.

Randy Morgan - a second generation young Queenslander who will add some spice to the line-up.

Brooke Tatnell - can he show them he still has what it takes? Does he have the speed? He has the team. He's home. That's got to count for something.

Mick Saller. Vastly improved since he had the Texan alongside. Is fast on his own now.

Mitchell Gee. The first time we've seen the former Queensland champion in a while. Has been fast in QLD this season.

Kiwi Brett Sullivan has another week under his belt with the ex-Brad Sweet Spike. Can he get the speed he needs this weekend?

Sam Walsh. Prior to Christmas he was one of the fastest cats in the country. Speedweek was not his best by any means though. It's time to bounce back.

Matt Geering. A surprise packet along with younger brother Luke is gaining more and more speed.

Warren Ferguson. Has yet to show what he's capable of this season but this weekend might change all that. Can be a big game player.

Carson Macedo. A lightning bolt. Fast in the Speedcar, fast in the Sprintcar. It's time to crack another Sprintcar win as far as Dyson Motorsport are concerned.

Jordyn Brazier. Fast but could use a change of luck. He was fast but unlucky last Saturday in the A-Main.