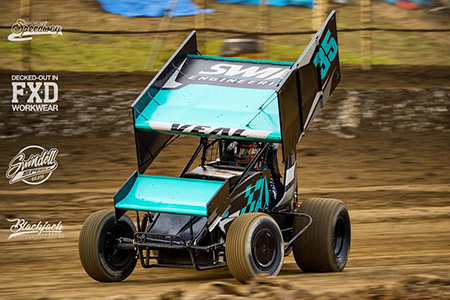 South Australian fans will be the first to see the new #1 on the tail tank of newly crowned Australian Sprintcar Champion Jamie Veal.

“The real deal” finally ticked the Aussie title off his bucket list and added it to a WSS Championship, a Warrnambool Classic win and an Australian 360ci Championship victory.

He was victorious in a 40-lap A-Main that will go down in history as one of the most torrid ever conducted.

Veal led the race early but was soon bombed by a battle pack including James McFadden and livewire local hero Shaun Dobson with the pair quickly relegating him to third.

A spin for Dobson unfortunately tagged McFadden and the resultant impact saw the hapless Robbie Farr plough into the melee and all three cars end up badly damaged and out of contention.

Veal and Kerry Madsen dodged the battle zone to emerge on the other side where they battled it out for the tense and caution light plagued remainder.

Madsen stalked leader Veal and then Marcus Dumesny bought into the argument moving into second.

The #35 was just too smooth and powered on to record an historic victory however.

“The track kept moving around and made it quite challenging actually,” Veal conceded later, “this is a great reward for my Mum and Dad, Juddy and Triggy and my team. They’ve all worked their butts off to make this happen and I can’t thank them enough. It feels incredible to finally win this race.”

In winning the title Veal becomes only the sixth Victorian to do so since 1963 joining Bill Willis, Graeme McCubbin, Brett Lacey, Max Dumesny, and David Murcott as Garden State national titleholders.

His appearance as the new National Champion this weekend at MMSS is a huge bonus for SA fans.

Unfortunately outgoing Australian champ Andrew Scheuerle is a late withdrawal from the field this Saturday night after the Toowoomba star rode out a nasty rollover in the Championship A-Main.

Scheuerle’s Ausdeck Racing #1 J&J was totalled in the fiery crash and it left the classy former Aussie champ a little bruised and battered himself.

His decision to return home to Queensland rather than Murray Bridge is buy tamoxifen respected and understood by MMSS and Ultimate Speedway Challenge organisers.