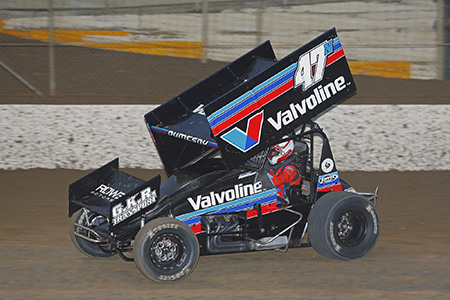 The Hi-Tec Oils Ultimate Speedway Challenge will visit the Murray Machining and Sheds Speedway at Murray Bridge for the final time this season on Saturday Night (February 8) with star studded line-ups in all three categories including the newly crowned Australian Sprintcar Champion Jamie Veal.

In all a total of 35 Sprintcars have nominated for what is Round 3 of the Ultimate Sprintcar Championship SA which is currently led by local Murray Bridge racer Ryan Jones, courtesy of his victory in the Bill Wigzell Battle of the Bridge and a fourth placed run at the Ultimate Pink Night.

Hard charging Matt Egel currently sits 10 points behind Jones in second in the overall Championship while the top five is rounded out by Marcus Dumesny, Jake Tranter and Steven Caruso.

After a stunning runner-up result in the Australian Championship last Saturday night Marcus Dumesny (pictured) will return to the seat of the Wayne Rowett owned Maxim at Murray Bridge, the same car he piloted to the win on night 2 of the Grand Annual Sprintcar Classic at Warrnambool.

Dumesny is also the current leader in the Hi-Tec Oils Ultimate Sprintcar Challenge, holding a 52-point lead over Michael Stewart.

Due to the high car count the Sprintcars will revert to the 1 heat format prior to the Last Chance Qualifier and the 30 lap A-Main.

As with all Hi-Tec Oils Ultimate Speedway Challenge events the night also includes Late Models and Speedcars with the Murray Bridge Late Model A-Main doubling as the South Australian Championship with a field of 20 ground pounding Late Models set to battle it out on the MMS clay way.

Last season Robbie Farr made history by capturing his first State Late Model Championship at this event but he will have his work cut out to repeat the feat as he has very few laps behind the wheel of his Late Model at the “Bridge” this season after mechanical dramas took him out early at his previous appearance.

Local hot shot Ryan Alexander was victorious the last time the Challenge was in town with fellow South Australian Andy Maxwell Jr joining him on the podium.

Joining the locals will be the strongest interstate contingent seen at Murray Bridge since the 2018 Australian Title with New South Wales being represented by Nathan Disney, Todd Bayley, Lachlan Onley and Ryan Fenech while Mick and Peter Nicola, Cameron Pearson and Brendan Hucker are among the Victorian entries. Tasmanian’s Brad Smith and Tim Pyke will both make their second MMSS appearance of the season.

Former National Champion Kaidon Brown has been racing in New Zealand and the USA lately so he will return to Murray Bridge with a lot of laps under his belt and will be hard to beat as he searches for his second cheap price bimatoprost win at Murray Bridge this season. Matthew Jackson is also a winner at the track this year aboard the V23 while Travis Mills, Nick Parker, Adan Wallis, Tom Payet and local Robert Heard will also be drivers to watch.

New Zealand youngster Kalib Currie could be the real wild card as he pilots the #6 for car owners Mark Harrington and Alison Dwyer.

Gates open 4pm - Action from 5pm
Tickets at the gate or online from www.speedwaytickets.com.au

It's Your Speedway, SA!