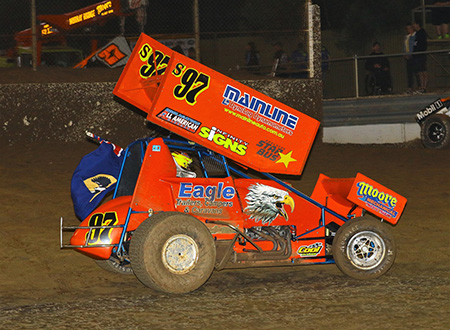 Matt Egel claimed his fourth career Ultimate Sprintcar Championship SA round victory on Saturday night at the Murray Machining and Sheds Speedway at Murray Bridge, on what proved to be a tough and controversial night.

The 30-lap A-Main doubled as the penultimate round of the Hi-Tec Oils Ultimate Speedway Challenge and with the remaining podium positions being made up of contacted series stars, Marcus Dumesny and Michael Stewart, the series is set for a dramatic finale at the Hi-Tec Oils Toowoomba Speedway.

“The track tonight was really tough and being out of the car for about a month made it even tougher. I’m spent” added Matt following the win.

“I couldn’t believe how long it took to get that race going. I won the start four times and the yellow lights kept coming on. I don’t what was going on back there. When Jamie got past me, I thought he was going to drive off but he got taken out by a lapped car and I feel for him, he had a great car. But once I got the lead I was trying to hang on” he added.

The feature event got off to a dramatic start with top qualifier Robbie Farr crashing out in turn two after the car bicycled. Several other incidents prior to a lap being completed saw the demise of Mick Saller, Steven Caruso and Jake Tranter.

With Farr on the infield Veal was elevated to the front row but it was Egel who led early before Veal took the lead in the #A1. Veal then began to open up a nice lead but his race would end on lap 12 as he got tangled up in lapped traffic and spun in turn two before being hit hard by third placed Craig Vanderstelt, who was having an outstanding night having topped his qualifying group before winning his heat.

From this point it was all Egel who piloted the Downing Brothers #97 to his second feature race victory of the MMSS season. Marcus Dumesny continued his outstanding recent run with yet another podium result while Michael Stewart got the better of Ryan Jones to secure a career best USC result.

For the first time this season the format for the Sprintcars reverted to the 1 heat format due to car count with the top four transferring directly into the A-Main.

The four heat winners all came from the front row of the grid with Craig Vanderstelt, Matt Egel, Jamie Veal and Robbie all securing a win. Daniel Pestka, Hayden Pitt, Peter Doukas and Lisa Walker completed the 20 car A-Main line-up after making their way into the field via the B-main.