Farr Holds On This Time at MMS 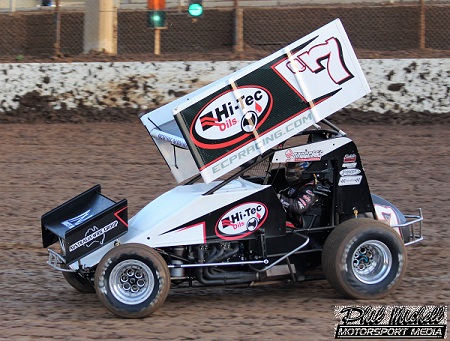 Robbie Farr held on to win the International Sprintcars Main event at MMS on Saturday night (Phil Michell Photo)
Once again, the South Australian race fans were treated to a fantastic night of Sprintcar racing at the Murray Machining and Sheds Murray Bridge Speedway, this time for Round 4 of Shadetec USC SA. After losing the previous round within sight of the chequered flag Robbie Farr wasn’t going to let it happen again as he fought off a determined Cory Eliason in yet another dramatic finish to an A-Main at MMS.

The record book will show that Farr led all 30 alps of the A-Main but the race for the lead was torrid affair as Eliason was all over the back of the #7 once he made his way into the runner-up spot on lap 9, with Eliason actually taking the lead with a pass on the low groove in turn two only to see the caution come out. With Eliason sneaking up on Farr, who was railing the top on the cushion, with a surprise move from that point Farr knew he was there he covered Eliason for the remaining laps. Although the Californian had 1 last attack with two laps to go in turn four with both cars making slight contact, but Farr held on for his first win of the season at MMS.

“I wasn’t going to lose another one like that again tonight. We have had great speed all season, but I have made a few mistakes that have kept us away from the win. Cory was good on the bottom, but we managed to hold him out. I must thank the crowd for coming out tonight and I hope they enjoyed the race, from my seat it looked like a really good race” commented Farr after the event.

While the battle for the lead was going on Marcus Dumesny, who was driving for Bordertown car owner Wayne Rowett, charged his way onto the podium from position nine on the grid with a series of spectacular sliders. Fourth place went the way of last round winner Matt Egel with Brock Hallett completing the top five.

For Walker the result could have been a whole lot better as she was driving a strong race before contact with Dumesny in turn four, after a slide job from Marcus forced the #4 hard into the turn four wall, breaking the Jacobs ladder.

It was similar story for Jones who in the early stages was in the runner-up position before contact with the lapped car of Lachlan McDonough sent Jones into a spin sending him to the rear of the field.

In what was an uncharacteristic run Luke Dillon was the first of the drivers a lap down in thirteenth with Tregan Gates and Sprintcar debutante Joel Heinrich the only other finishers.

The heat winners on the night were Luke Dillon, Cory Eliason, Ryan Jones and Brendan Quinn. Robbie Farr won the Pole Shuffle over Eliason while Farr and Eliason set the quickest times in their respective Time Trial groups.

The Zeke Agars Classic was also on the program for the V6 Sprints with Nick Hall defeating Steve Agars and Kym Simon in the 15-lap final.

Joel Chadwick wo the shortened Wingless Sprint feature over Matthew Kennedy and Cody Atkins, Rhys Heinrich was a dominant winner in the Street Stocks while Aaron Tranter claimed the Junior Sedan honours.